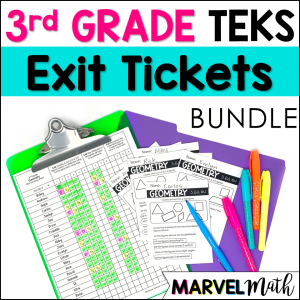 This set of Exit Slips covers all of the 3rd grade FRACTION TEKS: 3.3A, 3.3B, 3.3C, 3.3D, 3.3E, 3.3F, 3.3G, 3.3H, 3.6E & 3.7A, assessing each with STAAR formatted questions. Exit Slips, also called exit tickets, allow you to get a quick snapshot of student understanding and are an excellent assessment tool to drive your instruction and intervention. This set includes a data tracker that has keys for each exit slip and a place to record the names of students who need to be pulled for small group reteach, as well as an editable student check-off sheet to track performance.

6 Exit Slips for each of the Readiness TEKS:

4 Exit Slips for each of the Supporting TEKS:

There are a total of 44 exit slips, detailed keys and a data tracking system that is sure to impress your administrator. 🙂

This is a TEKS centered resource. While others may be TEKS-aligned, they often cover Common Core standards as well. My Texas specific resources cover the TEKS and nothing but the TEKS, so that teachers dont have to spend additional time sorting through what to use and what not to use. I know how precious each and every school day is; there is no time to waste. As with all of my resources, it is designed with STAAR in mind.