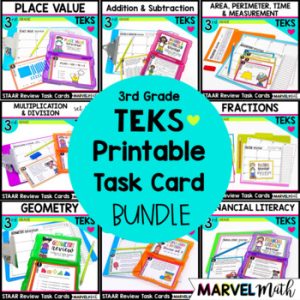 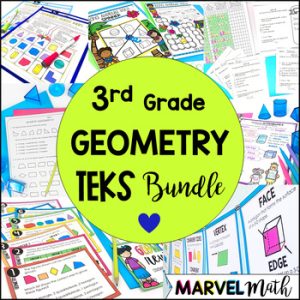 Students will love using these bright and colorful Task Cards with STAAR-formatted questions that cover sorting and classifying two and three dimensional shapes by attributes, naming quadrilaterals, and decomposing shapes into parts with an equal sized area.

You will love the diagnostic key that helps you easily identify student needs and form reteach groups quickly while you grade student work. The questions are rigorous and include convincing distractors (wrong answer choices), making these task cards a great tool in not only reviewing content but also giving you the opportunity to teach test-taking strategies.

?Task Cards include these TEKS?

3.6A Classify and sort two- and three-dimensional figures, including cones, cylinders, spheres, triangular and rectangular prisms, and cubes based on attributes using formal geometric language.

3.6E Decompose two congruent two-dimensional figures into parts with equal areas and express the area of each part as a unit fraction of the whole and recognize that equal shares of identical wholes need not have the same shape.