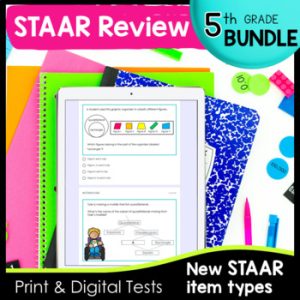 The digital versions of the tests can be assigned via Google Classroom or any platform that supports Google Forms. The questions are STAAR formatted and include the NEW Problem Types. The assessments are in 2 formats: printable PDF and digital, self-grading Google Forms.

Great ways to use this resource:

Each set automatically grades itself when students click submit! I have identified the standard for every single problem in this bundle, to make data tracking super simple.

You do not need Google Classroom to use the digital form of this resource, but you must have a Google e-mail to use Google Forms.

Geometry and Graphing on a Coordinate Grid Topics:

Geometry and Graphing on a Coordinate Grid TEKS Alignment:

5.5A Classify 2-D figures in a hierarchy of sets and subsets using graphic organizers based on their attributes and properties

5.8B Describe the process for graphing ordered pairs of numbers in the first quadrant of the coordinate plane.

5.8C Graph in the first quadrant of the coordinate plane ordered pairs of numbers arising from mathematical and real-world problems, including those generated by number patterns or found in input-output tables.